A Literary Librarian Poet’s Book of Poetry is Available! 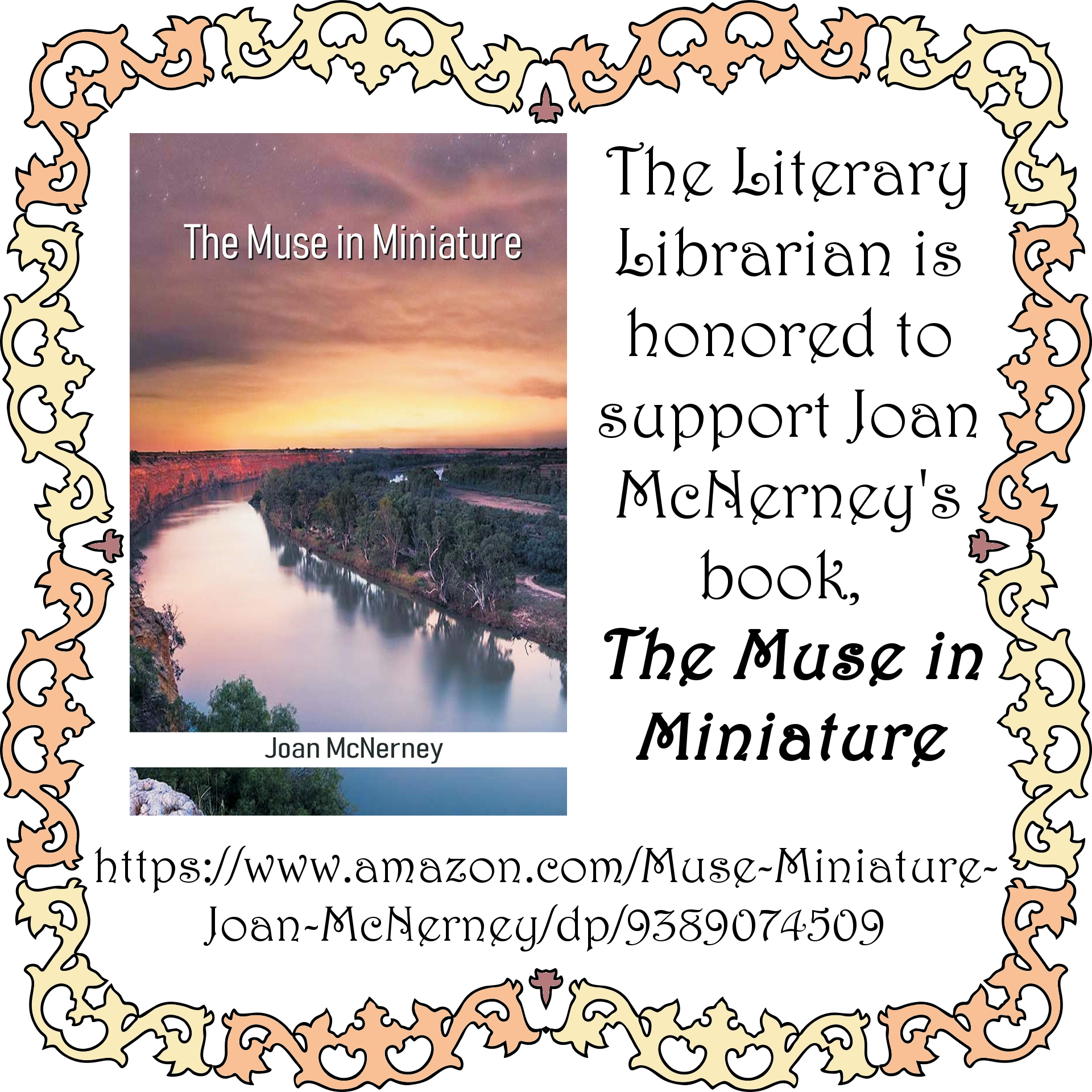 Request Support for Your Book, Today!

If you would like to see an ad for your book on The Literary Librarian, please use the contact form on this site.

Book Name and Description:  Poems in Water, and How the Blue-Tongued Skink got his Blue Tongue

How the Blue-Tongued Skink got his Blue Tongue, published by Another Think Coming Press.  (“Traveling a hero’s journey, Dinky overcomes bullying, tries to save us all, and gains a unique blue tongue in the process,” Loralie Pallotta, Preschool Owner, 26 years)

By Lingering Lake
I watch a Chinese poet
with sweeping brush strokes
write characters
in water
upon the pavement.

Disciples follow in silence
under the willow trees
reading retextured liquid,
the path an impermanent context.

I can’t decipher the message
of this groundling poem,
but feel unmoored
then embraced, bent and baptized,
evaporating verse
washing the dust from my heart.

What gave you the idea for Poems in Water?

The book is a collection of my poetry going back to about the mid-90s. I taught poetry for several years as a secondary English teacher. Poem ideas and lines began to “descend” on me after I left the classroom. The title comes from one poem, “Poem in Water.” While visiting China, I observed a poet write a poem on pavement with a brush full of water. A crowd surrounded him. I was very moved by his effort, because this verse would evaporate soon. It reminded me of the transiency of life and while we in the west strive to get published, here in China attention was paid to this moment making art, with an acceptance it would be gone in moments. So I look at all my poems in this collection as most likely transitory, like life, yet hoping a few will survive because they’ve touched people. My mother, June Langer, who is in her 90’s, painted the picture on the cover.

What gave you the idea for How the Blue-Tongued Skink got his Blue Tongue?

That book was a convergence of several ideas. On a business trip with my husband to Australia in 1980, I looked all over for children’s books for my then 7-year-old son, Matthew. There were few, and one about a dingo dog scared him silly. I decided someday I might have to write my own. Years later a friend told me he sold his rare blue-tongued skink to make a house payment. I looked the animal up and discovered it was a lizard native to Australia. Then I was teaching Steinbeck’s The Pearl to a 10th grade class and no student knew what the reference to The Garden was. I got upset. They knew all the myths but not this story? How would they appreciate or understand any American or English literature? So my tale is about a skink, native to Australia, set in a garden, similar to the one in the Bible.

What got you into writing in these genres?

I wrote a poem or two and took a class. The instructor invited me into his critique group that met bi-weekly. I was hooked. My children’s book sat for a number of years, and when I moved to the high desert there were no poets at that time in my California Writers Club branch. I dusted off the Dinky the Skink story and they loved it and asked me to read it at a Barnes and Noble reading. Both books won Indie Excellence Finalist Awards.

How long have you been writing?

Since 1974, the year my son was born, on my maternity leave. I published the first educational article I wrote and wrote more. But I soon discovered it wasn’t going to help pay my mortgage (and I had no skinks to sell), so I went back to teaching, which continued to inform my writing even to this day.

Tell us about your past books and stories?

In my schooling, I never was taught fiction, so decided to teach flash fiction to 7th graders and it was a lot of fun. Teaching is a great way to learn if you take it step by step (or bird by bird as Anne Lamott would say). I kept reading and writing and I have had some short stories published, many poems and have completed a memoir and two young adult novels that I need to start pitching.

What is the writing process like for you? What is your writing day like? What have been the biggest influences on your writing?

I’m retired but I volunteer, teaching writing workshops in schools, colleges, and prisons, so I budget my time carefully for writing every day. I’m in a critique group for poetry that I founded, the Poemsmiths, so I need to come up with a poem every two weeks. I write book reviews for Middleweb.com and San Diego Book Review, and those have writing deadlines. My schedule gets a little crazy sometimes and I have to remind myself I’m retired and need to take time with my family. But then, they give me writing ideas!

What is your favorite book (other than your own book, of course) and why? What book disappointed you and why?

To Kill a Mockingbird by Harper Lee is my favorite because I taught it to high schoolers, and it’s such a beautiful book that teaches empathy, even while exposing students to racism, all from a child’s point of view. Scout goes from innocence to experience.

The sequel, Go Set a Watchman, in 2015 was a disappointment. I loved Atticus too much to see him portrayed as a racist.

How do you think you’ve evolved creatively?

I’m more disciplined and intentional about my own work, and because I’ve read so many other writers’ work in critique groups, I’m more willing to take risks with different forms and even rhyme in poetry and try different genres.

What tools do you feel are must-haves for writers?
Prompt books when inspiration is lacking, time management skills to balance writing and living, and the willingness to ask for help from computer, editing, and marketing experts.

What is the best piece of advice you ever received from another author?

You can’t write for the money. You have to write because you can’t not write.

How do you market your work? What avenues have you found to work best for your genres?

Each genre has its own culture and groups of people who love that type of writing. Find those people and reach out to them. Join groups like Society of Children’s Books and Illustrators, read journals like Poets and Writers, be on Facebook, Twitter and read, read, read, and write book reviews, look up the authors, and communicate with them and ask them for book reviews. I used to think teachers were the kindest people on earth; now I’ve added writers to that group. We understand the struggle.

What piece of your own work are you most proud of?

Right now, my children’s book, which is also available in Spanish, because others have become enthusiastic about it. When my illustrator, Samantha Kickingbird, first showed me her drawing of Dinky the Skink, I fell in love with him. His anti-bullying message and message about the importance of choices is basically what I want to say to children and the world. So, Go, Dinky! It’s also been a lot of fun to have family members and friends get involved. My son suggested kids eat a blue raspberry Tootsie Pop while they read so their own tongues turn blue, and my husband became my publisher with Another Think Coming Press. Friends who spoke Spanish (Thank you, Brad Langer, Spanish professor, and Rebecca Galonski) edited the Spanish version and I would use my illustrator again and my translator, Ana Morris.

For those who haven’t read any of your stories, what story/book of yours do you think best represents your work and why?

I published a short story called “The Cut-ups” that shows a young man about to graduate high school who tries to get in touch with his junior high English teacher who inspired him to write, to invite her to his ceremony. He finds her on Facebook, but discovers she’s dead when he goes to her house. Her husband wants him to write a poem for the eulogy, a poem made of cut-out words, a found poem, at her funeral. He doesn’t want to grieve on his own special day. Now what? The teacher of course is me. I hope I’ve inspired both young and older writers to write.

What are you doing next?

I’m editing my young adult novel about Mary Lou who moves with her family from Chicago to Los Angeles in 1958 along Route ’66. She learns a lot about our country, family secrets, and herself along the way.

What advice would you give aspiring writers?

Don’t give up your day job, and don’t be disappointed when your book isn’t an instant best seller. Go on to the next one. Keep writing.

Mary Langer Thompson’s award-winning poems, short stories, and essays appear in various journals and anthologies. She is a contributor to two poetry writing texts, The Working Poet (Autumn Press, 2009) and Women and Poetry: Writing, Revising, Publishing and Teaching (McFarland, 2012), and was the 2012 Senior Poet Laureate of California. Her children’s book How the Blue-Tongued Skink got his Blue Tongue was recently released by Another Think Coming Press. A retired school principal and former secondary English teacher, Langer Thompson received her Ed.D. from the University of California, Los Angeles. She continues to enjoy conducting writing workshops for schools, prisons, and in her community of the high desert of California.

Poems in Water on Amazon

How the Blue-Tongued Skink got his Blue Tongue on Amazon